There’s nothing worse than getting ready to leave for work in the morning and making your way outside to find that your vehicle won’t start. You can tell it’s a problem with your battery if the dome light didn’t turn on when you opened the door, the radio doesn’t turn on when you put the key in the ignition and the engine cranks slowly when you turn the key. If your car isn’t experiencing those symptoms, but it’s not starting, check out common truck starting problems and solutions. Luckily, you can revive your vehicle with a jump start, so grab your jumper cables, call up a friend with a vehicle and read the steps below. 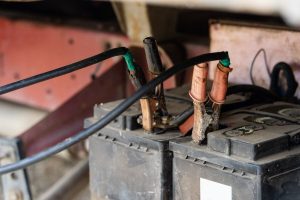 It is important to inspect both batteries to help make sure neither the cars nor individuals jumping them are injured. Make sure the battery being jump-started isn’t corroded, leaking or frozen. Next, check the voltage on the batteries and make sure they match, so you want a 6-volt battery jump-starting another 6-volt battery, as mixing voltages could cause damage to both vehicles. Also, make sure you do not connect the alligator clips to each other.

Read more: How Often Should You Replace Your Brakes?

How to Jump a Car

After you run your vehicle for several minutes, head to your destination and make sure you have all doors closed and lights off. For more tips, check out our blog!

Do you know when it's time to replace your car's tires?

A clean car is a happy car, check out these businesses

This entry was posted on Friday, November 8th, 2019 at 7:30 am and is filed under Tips and Tricks. You can follow any responses to this entry through the RSS 2.0 feed. Both comments and pings are currently closed.